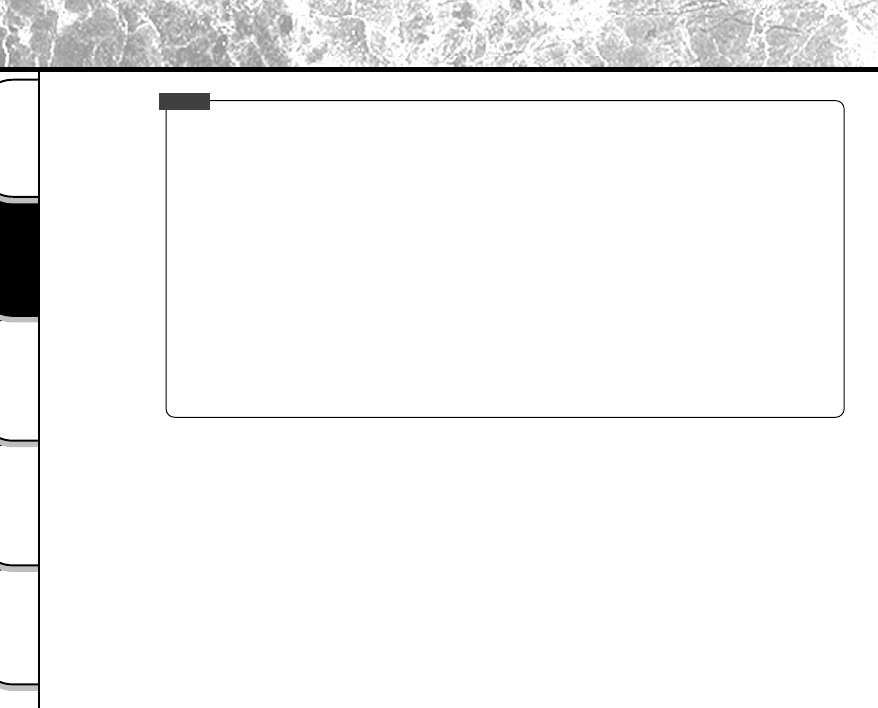 - 40 -
Basic
Photography
Playing Back/
Erasing Images
Other
Applications
Additional
Information
Getting Ready
Memo
• If the shutter button is pressed all the way down, photographs cannot be taken until AF and AE are
locked.
• The image in the LCD monitor sometimes darkens from the time that the shutter button is pressed down
half way until the image becomes focused.
• To focus or expose a position outside the center of the screen frame, move the subject you are taking to
the center of the screen frame, and press down the shutter button half way. Now, with the shutter button
held down, return to the original picture that you composed and press the shutter button down fully.*
Moving the camera as you press the shutter button will result in a blurred image.
• The PDR-M5 uses an accurate auto focus mechanism. However, the PDR-M5 may have difficulty
focusing or not be able to focus at all for subjects and situations such as the following:
• If the image cannot be focused, the focus is automatically fixed to infinity. When the flash is necessary
at this time, it is simultaneously fixed to illuminate objects five feet (1.5 meters) away.
- Subjects moving at high speed
- Very shiny subjects such as a mirror or car body
- Extremely low contrast subjects
- Subjects that have low contrast and merge into the
background (such as white walls or subjects dressed
in the same color as the background)
- When the subject is distant and dark
- When there are objects in front of or behind the subject
(such as an animal in a cage or a person in front of a tree)
- Subjects with little reflection, such a hair or fur
- Subjects with no solidity, such as smoke or flames
- Subjects viewed through glass
How to Press the Shutter Button (continued)
previous next