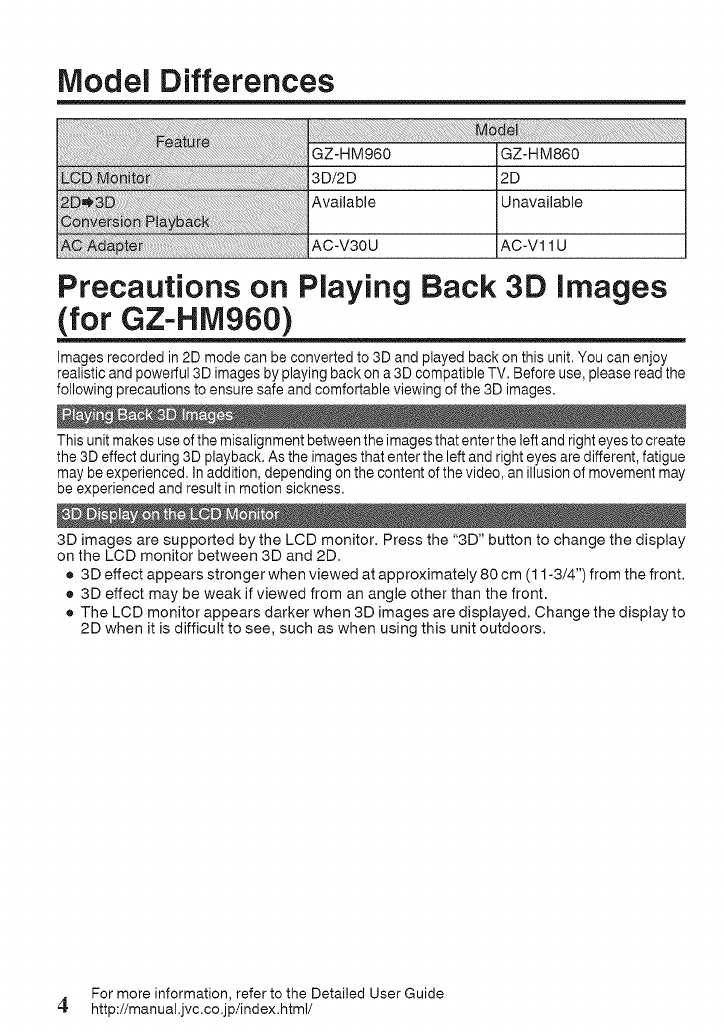 Model Differences
GZ-HM960 GZ-HM860
3D/2D 2D
Available Unavailable
Precautions on Playing Back 3D Images
(for GZ-HM960)
Images recorded in 2D mode can be converted to 3D and played back on this unit, Youcan enjoy
realistic and powerful3D images byplayingback ona 3D compatible TV. Beforeuse, please read the
following precautions to ensuresafe andcomfortable viewingof the 3D images.
This unitmakesuse ofthe misalignment betweenthe imagesthat enterthe leftand righteyesto create
the 3Deffect during 3D playback, As the imagesthat enterthe left and righteyes are different, fatigue
may be experienced. Inaddition, depending onthe content ofthe video, anillusion ofmovement may
be experienced and result in motion sickness,
3D images are supported by the LCD monitor. Press the "3D" button to change the display
on the LCD monitor between 3D and 2D.
• 3D effect appears stronger when viewed at approximately 80 cm (11-3/4") from the front.
3D effect may be weak if viewed from an angle other than the front.
The LCD monitor appears darker when 3D images are displayed. Change the display to
2D when it is difficult to see, such as when using this unit outdoors.
For more information, refer to the Detailed User Guide
4, http://manual.jvc.co.jp/index.html/
previous next