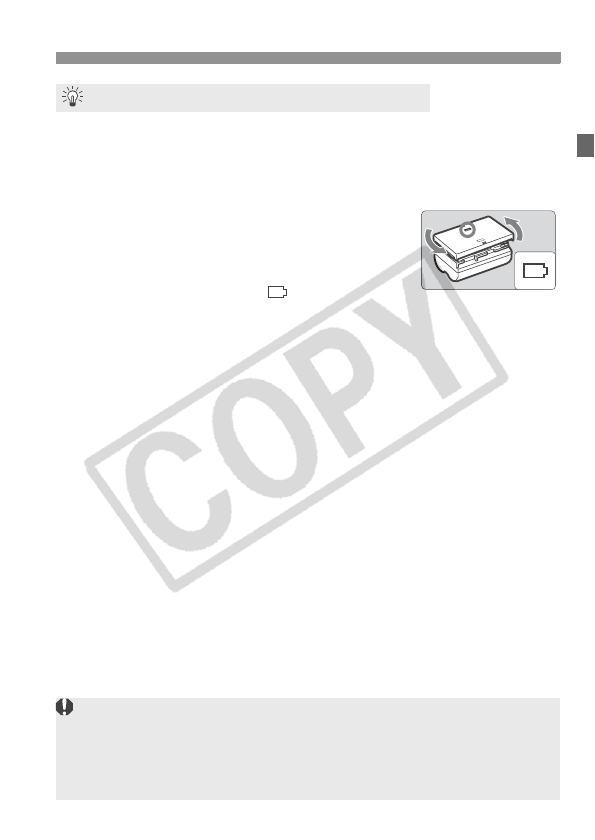 25
Recharging the Battery
Recharge the battery on the day before or on the day it is to be used.
A charged battery unused will still gradually lose its power over time.
After recharging the battery, detach it and unplug the charger
from the power outlet.
You can attach the cover in a different
orientation to indicate whether the battery
has been recharged or not.
If the battery has been recharged, attach the cover so
that the battery-shaped hole < > is aligned over
the blue seal on the battery. If the battery is
exhausted, attach the cover in the opposite orientation.
Use the battery in an ambient temperature range of 0°C - 40°C /
32°F - 104°F.
To attain best battery performance, an ambient temperature of 10°C - 30°C /
50°F - 86°F is recommended. In cold locations such as snowy areas, battery
performance and operation time may temporarily decrease.
When not using the camera, remove the battery.
If the battery is left in the camera for a prolonged period, a small amount of power
current is released, resulting in excess discharge and shorter battery life. Take out
the battery from the camera and attach the protective cover before storing. Storing
the battery after it is fully charged can lower the battery’s performance.
The battery charger can also be used in foreign countries.
The battery charger is compatible with a 100 V AC to 240 V AC 50/60 Hz power source.
Use a commercially-available plug adapter for that country. Do not attach any portable
voltage transformer to the battery charger. Doing so can damage the battery charger.
If the battery becomes exhausted quickly even after being fully
charged, replace the battery.
Replace the battery with a new one.
Tips for Using the Battery and Charger
Do not recharge any battery pack other than Battery Pack BP-511A, BP-
514, BP-511, or BP-512.
Battery Packs BP-511A, BP-514, BP-511, and BP-512 are dedicated to
Canon products. Using it with a non-Canon battery charger or product may
result in malfunction or accidents for which Canon cannot be held liable.
previous next