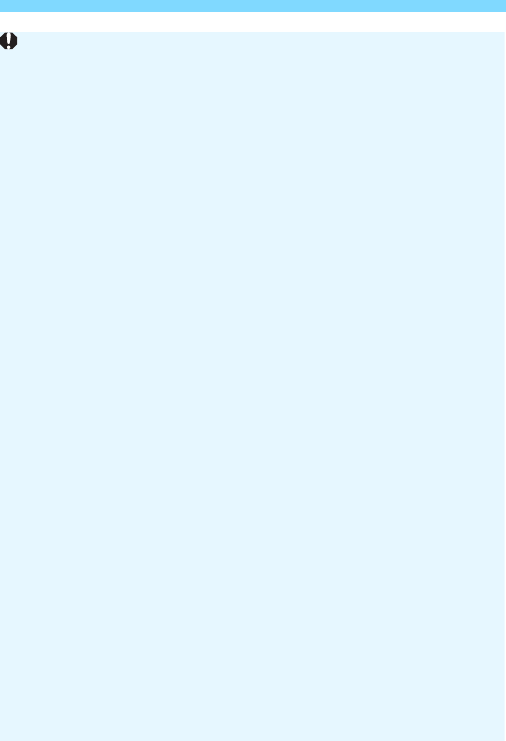 268
General Movie Shooting Cautions
White <s> and Red <E> Internal Temperature Warning Icons
 If the camera’s internal temperature increases due to prolonged movie
shooting or under a high ambient temperature, a white <s> or red <E>
icon will appear.
 The white <s> icon indicates that the image quality of still photos will
deteriorate. It is recommended that you stop still photo shooting for a
while and allow the camera to cool down. Since movie image quality will
hardly be affected, you can still shoot movies.
 The red <E> icon indicates that movie shooting will soon be terminated
automatically. If this happens, you will not be able to shoot again until the
camera’s internal temperature decreases. Turn off the power and let the
camera rest for a while.
 Shooting a movie at a high temperature for a prolonged period will cause
the <s> or <E> icon to appear earlier. When you are not shooting,
always turn off the camera.
Recording and Image Quality

If the attached lens has an Image Stabilizer and you set the Image Stabilizer
(IS) switch to <
1
>, the Image Stabilizer will operate at all times even if you
do not press the shutter button halfway. The Image Stabilizer consumes
battery power and may shorten the total movie shooting time or decrease
the number of possible shots. If you use a tripod or if the Image Stabilizer is
not necessary, it is recommended to set the IS switch to <
2
>.
 The camera’s built-in microphones will also pick up camera operation
noise. Use an external microphone (commercially available) to reduce
camera operation noise in the movie.
 Do not connect anything other than an external microphone to the
camera’s external microphone IN terminal.

If the brightness changes during autoexposure movie shooting, the movie
may freeze temporarily. In such cases, shoot movies with manual
exposure.
 If there is a very bright light source in the image, the bright area may
appear black on the LCD monitor. The movie will be recorded almost
exactly as it appears on the LCD monitor.
 In low light, noise or irregular colors may appear in the image. The movie
will be recorded almost exactly as it appears on the LCD monitor.
 If you play back a movie with other devices, image or sound quality may
deteriorate or playback may not be possible (even if the devices support
MP4 format).
previous next