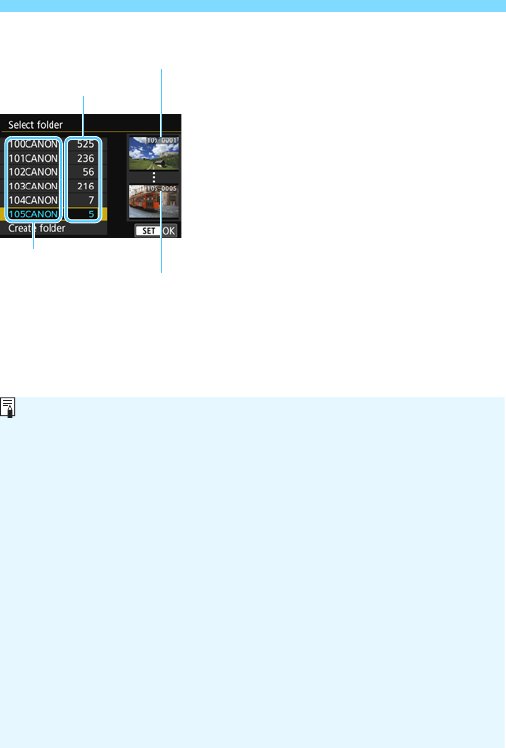 Handy Features
276
Selecting a Folder
 With the folder selection screen
displayed, select a folder and press
<0>.
 The folder where the captured
images will be saved is selected.
 Subsequent captured images will be
recorded into the selected folder.
Number of images in folder
Folder name
Lowest file number
Highest file number
Folders
As with “100CANON” for example, the folder name starts with three digits
(the folder number) followed by five alphanumeric characters. A folder can
contain up to 9999 images (file number 0001 - 9999). When a folder
becomes full, a new folder with the folder number increased by one is
created automatically. Also, if manual reset (p.278) is executed, a new
folder will be created automatically. Folders numbered from 100 to 999 can
be created.
Creating Folders with a Computer
With the card open on the screen, create a new folder named “DCIM”. Open
the DCIM folder and create as many folders as necessary to save and
organize your images. The folder name must follow the format
“100ABC_D”. The first three digits are the folder number, from 100 to 999.
The last five characters can be any combination of upper- and lower-case
letters from A to Z, numerals, and the underscore “_”. The space cannot be
used. Also note that two folder names cannot share the same three-digit
folder number (for example, “100ABC_D” and “100W_XYZ”), even if the last
five characters in each name are different.
previous next